â€œChongqing madeâ€ large-size sapphire substrate â€œsceneryâ€ was exported overseas. Since its production in the second half of 2011, Silian Optoelectronics has become the preferred partner of the world's top lighting manufacturers such as OSRAM and Philips. In the face of such a beautiful "transcript", the head of Silian Optoelectronics Technology was worried when interviewed.

"Although our sapphire substrate technology has reached the world's leading level, but the chip technology is a blank," he admitted.

Profit profits are earned by foreigners

It turns out that since the 1960s, companies in Germany, Japan, the United States, the Netherlands and other countries have firmly mastered the core technology of chips, and have formed patent barriers. Domestic companies must use high-end chips to import from abroad.

Not long ago, Shenzhen, which has been the development center of China's LED industry, suddenly announced the abolition of the LED industry plan introduced in 2009. The background is that a large number of enterprises are blindly flooding into the LED downstream packaging and application market, and they are growing together, resulting in overcapacity, while most of the mid-upstream substrate and chip markets have insufficient core competitiveness. The entire industry has not developed as rapidly as originally imagined, and even many enterprises with a production value of "100 million yuan" have closed down.

Since the overseas â€œbargain-huntingâ€ in 2008, after acquiring the Canadian sapphire business of Honeywell, the company has not only a strong technical advantage on the sapphire substrate, but also reached the domestic advanced level in the packaging and application. . However, most of their chips still rely on imports. "This has led to the profit of the chip in our LED products being basically earned by foreigners."

Silian Optoelectronics came up with two strategies to deal with it. One is to exchange patents for patents, realize patent cross-licensing, and use each other. At present, Silian Optoelectronics holds 72 patents, mostly in the packaging and application. If foreign companies are to develop downstream in the Chinese market, at least Silian Optoelectronics can also form some patent barriers, making "chips" for cross-licensing. The second is to keep a close eye on the cutting-edge technology of the international LED industry. Before the product development, the patent layout will be carried out in China. "At the moment, we are working on these two aspects," the official said.

"China's LED industry has initially formed a relatively complete industrial chain, but most of the domestic enterprises are concentrated in the downstream industries, and there are few in the middle and upper reaches." Chen Jigang, deputy director of the Chongqing Intellectual Property Research Association and deputy director of the Municipal Intellectual Property Office, said This structural imbalance is, in the final analysis, caused by a lack of technology.

In March this year, the LED industry patent analysis completed in Chongqing showed that domestic LED patents accounted for only 4.1% of the upstream and middle fields of substrates, epitaxy and chips, and more were distributed in packaging and applications. The ratio is 17.3%.

Among them, the chip patent is the most intensive. Japan, South Korea, the United States, and Europe accounted for 76.6% of the total number of applications in this area, while China (excluding Taiwan) accounted for only 7.2%.

As a result, foreign companies often adopt the method of setting patent barriers to maintain their advantages in related fields. "If you master the patent, you will have the right to speak. If you want to raise the price, others will raise the price. If you don't cooperate with anyone, you will not cooperate with anyone. Our company has no technology and is always in a disadvantageous position in the competition." Chen Jigang said frankly, right now, Cree, Osram, Nichia Chemical, Toyota Synthetic, and Philips' five multinational giants have actually joined forces in the LED industry to build the above patent barriers.

"This will be like a 'time bomb', which will bring trouble to the development of enterprises. Foreign companies will even frequently create trade frictions and intellectual property disputes, and suppress the entire industry." Chen Jigang said that this essentially involves the state and the country. Conflict of interest and game.

How to ensure the safety of industrial development

Chen Jigang believes that, first of all, enterprises must learn to use their patent strategy to arm themselves. At this stage, they can improve the core patents of competitors through the form of â€œreference innovationâ€, bypassing the patent blockade of foreign countries and avoiding the risk of infringement.

Secondly, the integration of technology and patent resources within the industry, the construction of its own peripheral patent network, led by leading enterprises, the formation of different industry alliances, "cluster" to deal with patent barriers.

Third, the government should explore the establishment of an early warning mechanism for intellectual property rights and encourage enterprises to actively deal with patent litigation.

"The patent issue is ultimately a matter of economic interest. China's huge market is coveted by foreign companies. We should think about how to use the market as a bargaining chip to trade foreign companies in technological innovation and patent licensing in the WTO framework, in order to achieve The balance of interests between the two sides." Chen Jigang said.

(This article is reproduced on the Internet. The texts and opinions expressed in this article have not been confirmed by this site, nor do they represent the position of Gaogong LED. Readers need to verify the relevant content by themselves.) 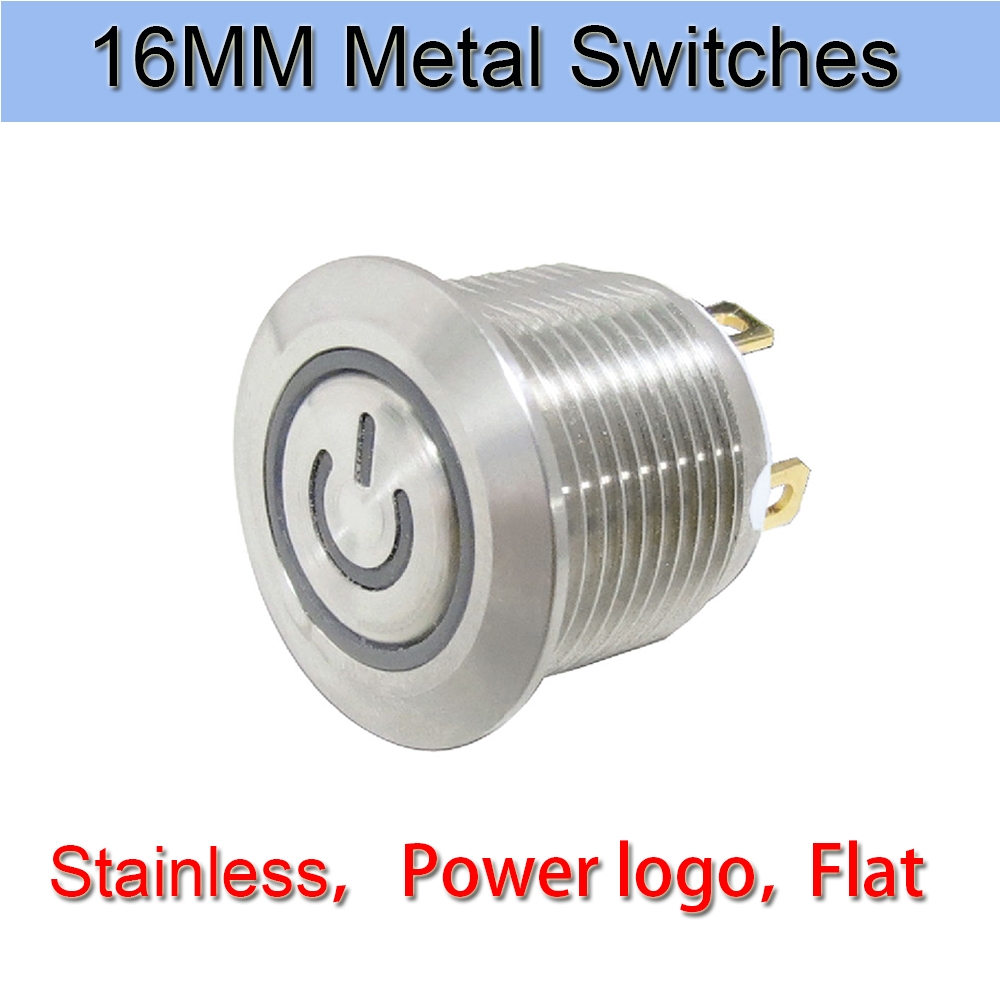 In addition, All casings are made through high-precision lathes, and the polishing and plating are rigorously screened. The metal fittings inside the metal switches are made of brass gold plated material, so the switch can have good conduction function and stable quality after long-term use.

The 16 series illuminated metal switches offer a long life expectancy, water resistance to IP67 ratings, and ring or power symbol illumination.This switch has a 16mm panel cutout size. Additional options include a high, high flat or rounded bezel option, and your choice of a solder lug or wire lead termination.

As for the indicator light , we offer customized service, customers could choose the effect , shape and the color. What is worth mentioning is that our indicator light could offer double color, which could offer our customers more choose in the item of light. Meanwhile, on the item of terminal shape, we could also offer customized service, we have solder terminal and free wire length could choose, 500mm is the normal standard. 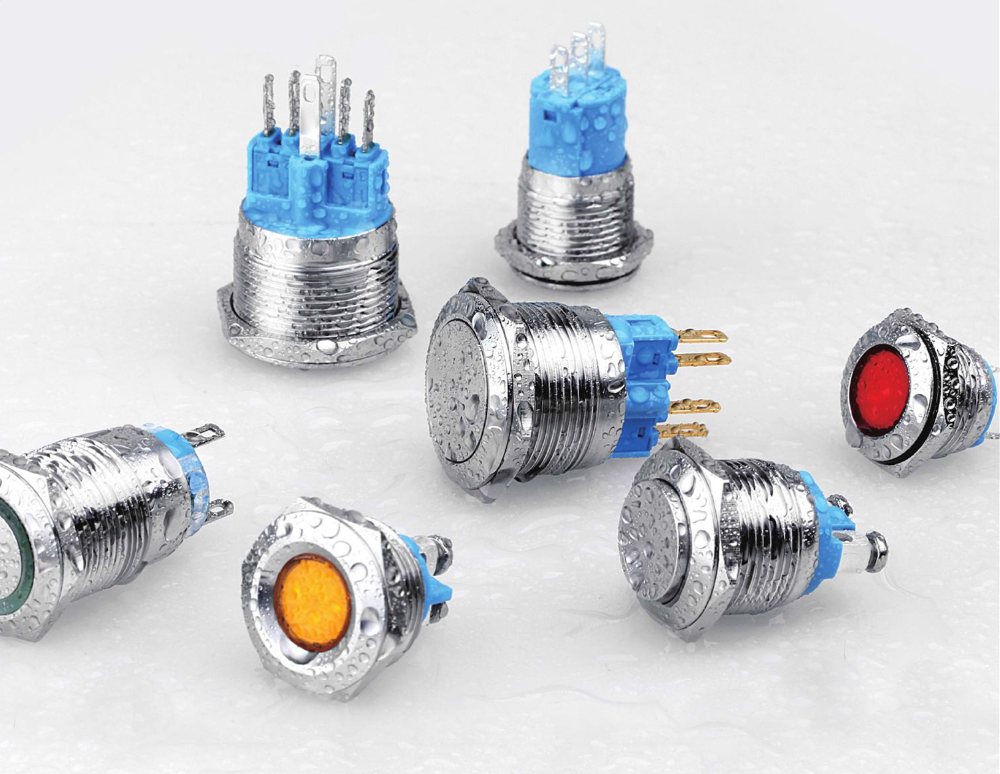 This serious metal Push Button Switches are of high quality and reliable products. The switch has passed IP67 dust proof and waterproof certification, which indicates it can be operated in harsh environments. Moreover, all materials could meet the European and American environmental protection requirements , for example, UL and ROHS certificate.