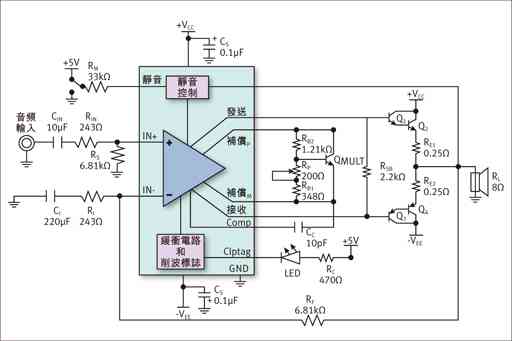 In general, there are two types of audio input designs commonly used: AC or DC coupled input. The advantage of AC-coupled input is that the input DC offset of the amplifier from the preamplifier, filter stage or codec stage is generally zero, and there is no need to add any DC servo circuit in the amplifier to prevent DC failure. The advantage of DC-coupled input is that it does not require the use of large-sized and expensive AC-coupling capacitors; low-frequency distortion caused by AC-coupling capacitors does not occur; and the noise of AC-coupled RC networks can be reduced.

Compensation: The amplifier's compensation is used to adjust the open-loop gain and phase performance so that the system can be stabilized when feedback is turned off. Generally speaking, the higher the stability compensation, the better. However, the greater the compensation, the lower the bandwidth and slew rate of the audio chip, and a lower slew rate will cause the system to produce softer audio characteristics. True audio characteristics. LME49810 Miller compensation is achieved by inserting a capacitor between the 'Comp' and 'BiasM' pins. The most suitable capacitor value range is 10p to 100p. In addition, the equivalent series resistance (ESR) of the compensation capacitor should be low to avoid potential zeros caused by the equivalent series resistance of the capacitor. In general, ceramic capacitors are better than electrolytic capacitors.

Output bias: LME49810 has two dedicated pins (BIASP and BIASM) for setting bias, which can provide a certain output bias current. The variable resistor Rpot can be used to adjust the bias current of the output stage. Lowering the resistance of Rpot + R b1 can increase the bias voltage. The multiplier QMULT is used to compensate the bias voltage to prevent thermal drift of the bipolar output transistor. QMULT must be connected to the same heat sink as the output transistor. 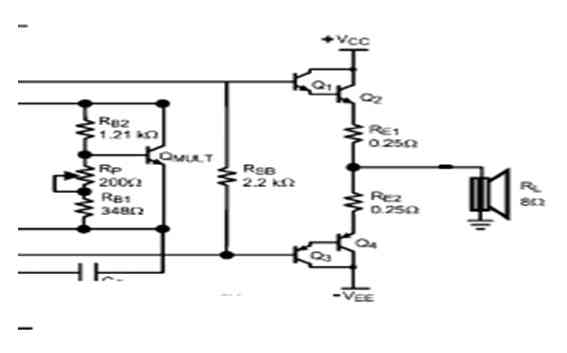 The linearity of the large signal of the emitter follower mainly depends on the size of the load. As the load increases (ie, the load resistance decreases), the output current will also increase. Affected by RE and Î² roll-off at high current density, the BJT current gain is reduced. In this case, it may reduce linearity and increase distortion at the output stage. For higher power applications, it is recommended to use a multi-level output to maintain high current and better linearity. The LME49810 audio driver has an output current of about 50mA, which can be configured as a Darlington tube or parallel transistor output as required.

Output stage transistor amplification matching: double-emitter-follower or Darlington tubes usually have a high current gain coefficient Ic = Î²Ib. In order to improve the stability of the output stage, the current amplification of the negative terminal and the positive terminal must be matched.

Figure 4: Application of the negative feedback resistance of the emitter.

Output transistor voltage range: The maximum range of VCBO and VCEO voltage must be greater than the rail-to-rail range of the supply voltage. For an amplifier with a supply voltage of +/- 100V, the voltage rating of the transistor should be a little higher to ensure that it can operate normally within the specifications. 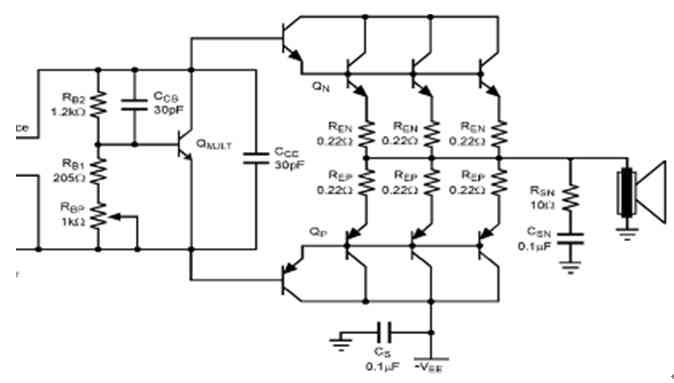 Figure 5: The output configurable structure of the audio amplifier.

The most effective way to improve crossover distortion is to reduce the resistance of RE. For REs of the same value, a parallel output can reduce the overall RE resistance value used to improve linearity. At the same time, if the RE of each stage is larger, it can bring better matching and current balance to the output transistor. In addition, RE is also related to the output power loss. For an identical RE, a larger output current will cause a larger power loss. The value of RE depends on the number of parallel output transistors and the load of the speaker. It is recommended to use 0.1 to 0.5Î© resistors with sufficient power.

Output network: The most commonly used output network for power amplifiers is 'Zobel'. All output networks have only one goal, which is to improve the stability of the system. Another function of the 'Zobel' network is to protect the output of the amplifier from the inductance in the speaker coil. The 'Zobel' network proposed here has resistors and capacitors connected in series, and the output from the amplifier is connected to ground.