[Abstract] It is not difficult to increase the speed and reduce fees. The Prime Minister can be effective when he speaks. This contradicts that the operators did not take the user seriously. 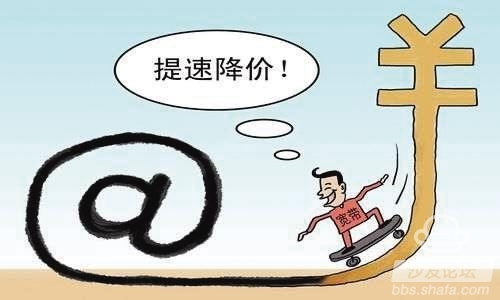 On May 13, Premier Li Keqiang presided over the executive meeting of the State Council and clearly put forward five specific measures to promote broadband speed reduction and fee reduction, including encouraging telecommunications companies to issue plans for speeding up and reducing fees as soon as possible. On May 15, Mobile, China Unicom, and telecommunications, the three major operators also disclosed the implementation plan for specific speed-up and fee-reduction.

The actions of the three major operators are fast, only two days away from the â€œorderâ€ of the State Councilâ€™s executive meeting on Wednesday! As the saying goes, "Good food is not afraid of the night," and hundreds of millions of users have finally waited for this day. Whatever you say, you should be happy. This is a visible benefit.

In the past two months or so, the Prime Minister has lamented on several occasions that Chinaâ€™s Internet speed is slow and charges are high. For example, â€œSome developing countries have faster Internet speeds than Beijing!â€ and â€œaccording to the evaluation of the International Telecommunication Union, we rank in the world. "After 80 years," "We traveled more than 100 million people overseas last year. As a result, the growth rate of roaming abroad has been declining. Because roaming charges are too expensive! ... The people are very clear that your Internet and traffic charges are too high." He will not use it!".

The prime minister made every effort to solve the problem of speedy network charges. He repeatedly made inquiries to operators. Do operators feel embarrassed? If there are no repeated requests from the Prime Minister, will operators quickly reduce their fees and charges?

China's slow network speed and high fees have been the focus of pain for many years, but it has not been resolved. It was not until the Prime Minister delivered a speech that it was quickly advancing. It was unavoidable that the operators did not seem to really care about the users, but â€œto the Premier face".

In fact, the speed increase and fee reduction should be given to the market, and the market has the final say. In this regard, Premier Li Keqiang made it very clear: Lowering network fees and traffic charges is not a government decision, but rather a market choice of â€œnot to dropâ€.

However, why did the market fail? Why does the operator have to take action if it has to put pressure on the government? "Non-can't, it's not true," and it's not difficult to increase the speed and reduce fees. The Prime Minister can be effective when he speaks. This proves that the operator did not take the user seriously. With a truly dynamic and fair market, consumers may be elated, not everywhere.

Then, how can operators really respect the market and respect users? There is only one answer to make the market more competitive. This requires breaking the monopoly. For example, not only must the public capital come in, it must survive. When the user chooses more space, the operators will compete to please the user. At that time, operators did not dare to be arrogant without the need for the Prime Minister to speak.

This content is copyrighted exclusively by SofaNet. Welcome manufacturers to further exchanges and cooperation with us to create more in-depth product reports.